Blog Nutrition Health Benefits Of Olives: The Truth About This Greek Fruit

Health Benefits Of Olives: The Truth About This Greek Fruit

We well know of the common benefits of olive oil, but what of the health benefits of olives themselves? We’re talking about the fruit that makes this well beloved oil. These fruits have been around for years but apart from their use in making cooking oil, they never seem to get mentioned a lot in any recipes – of course apart from in pizza and only as a topping. In today’s article we are going to enlighten you about the health benefits of eating olives, their nutrition profile and this Mediterranean fruit should be making an appearance in many of your meals including your stews, salads, and sandwiches.

What Are Olives And How Can You Use Them?

Olives come from the olive tree, scientific name Olea europaea meaning European olive and according to Medical News Today, these trees have been cultivated for over 7,000 years for their nutritional benefits.

In botany, an olive is classified as a drupe or otherwise as a stone fruit, which is essentially a simple fleshy fruit that usually contains a single seed – the seed in an olive is the pit. Other fruits that are also classified as drupes include mangoes, peaches, cherries, walnuts, almonds, coconuts, and pistachios (6).

Other than their obvious use in making olive oil and as a pizza topping, the Food Network suggests using them in dips, sauces, hummus, adding them to salads and wraps, using them in baking as stuffing and dressing, and even using them in eggs dishes such as omelets, frittatas, and to elevate basic scrambled eggs.

How Many Calories In Olives?

According to The Olive Times, there are about 139 varieties of olives grown in 23 countries around that world – a number that represents 85 percent of all olives around the world. With this in mind, figuring out the calories for each and every variety would certainly be a headache.

To make matters easier, in the table below we are going to look into calories of black olives, green olives and Kalamata olives – the most common types (13, 21, 20):

Read More: Canola Oil Vs Olive Oil: Which Is Healthier?

Calories aside, what nutrition is available from olives? The table below further explores the macronutrients, vitamins and minerals found in 1 cup (135 g) of black and green olives (21, 20):

Olives also have small amounts of other important nutrients and antioxidants such as selenium, zinc, phosphorus, vitamin b6, copper, lutein and zeaxanthin, and much more.

What Are The Health Benefits Of Olives

Nutrition facts aside, what are the health benefits of olives? How does eating them affect your body and improve your health?

The biggest impact of olives on your health comes from these phytonutrients.

Phytonutrients are plant chemical compounds that are produced by plants to help them resist attacks from fungi, bacteria and plant virus infections. In human beings these phytonutrients may help prevent disease and keep your body working properly.

Some phytonutrients found in olives that are good for human health include:

These powerful antioxidants help protect your eyes from harmful high-energy light waves like ultraviolet rays in sunlight. They are also said to improve vision and prevent age-related eye diseases and slow down macular degeneration.

One animal study published in the Journal of Agricultural and Food Chemistry, showed that olive oil helped improve the absorption of lutein and zeaxanthin from leafy greens (14). So using olive oil as a dressing on your salad may help you prevent or slow down age-related macular degeneration.

This is a naturally occurring antioxidant/phenolic compound found in olive leaves and the oil of its fruit. Studies have found that this antioxidant can significantly reduce systolic and diastolic blood pressure. Oleuropein also has antioxidant, anti-inflammatory, anti-atherogenic, anti-cancer, antimicrobial, and antiviral properties which makes it exceptional for your health (17, 16)

This compound is at its highest levels in ripened olives as the process increases this compound in the fruit. According to a study published in 2018, this is the most powerful antioxidant found in olives. Its benefits range from its uses as an antioxidant, anti-inflammatory, anticancer, and as a protector of skin and eyes (12).

See also
Are Bell Peppers Good For You? Nutrition And Health Benefits Of These Vegetables

A study published in 2014 by the Hellenic Journal of Nuclear Medicine also stated that this antioxidant acts as a potential anticancer and chemopreventive agent (4). In the same year, a review in the Frontiers in Nutrition journal discussed that this antioxidant may have the potential to prevent cancer, cardiovascular illnesses, and help inhibit the HIV-1 fusion core formation, which could help prevent the infection of HIV (20).

Read More: Why Is Gluten Bad For You? Analyzing The Harm Behind This Food

Another antioxidant found in olives, it is shown to be particularly effective in the prevention of oxidative stress/damage. Studies have confirmed that this antioxidant may have beneficial effects against hypertension, atherosclerosis, coronary heart disease, chronic heart failure, insulin resistance and obesity (11).

According to a study published in 2016 by the Pharmacognosy Reviews journal this antioxidant (22).

So, in short, what are the potential health benefits of olives? As seen above the antioxidants these stone fruits may play a big impact in the state of your health by:

While human studies on the effects of olives on bone health are still missing, animal studies on the same have had positive results with researches finding that olive oil prevents bone loss in lab animals (18, 19).

What Are The Side Effects Of Eating Olives?

Despite their incredible benefits, eating too many olives may come with potential downsides. Some of them include

Allergic reaction to the olive fruit itself (not the pollen or leaves) may be rare but it is not unheard of. In 2009, the Journal of Investigational Allergology and Clinical Immunology reported a case of a 28-year old man who had a case of palatial itching (itchy roof of mouth) and generalized urticaria (hives). After a series of tests, doctors found out that after 3 years of eating olives, the man had developed an allergy towards them. What was even more interesting was that he had no reactions to olive oil or any other fruits that he had been consuming. While this man’s case was unique, it shows that such an allergy, while rare, exists (8).

A review published years later in 2012 by the Talanta Journal, stressed the need for more research into food allergies caused by olives. It stated cases of contact dermatitis and food allergy to the olive fruit and olive oil have been reported and while most allergic reactions – at the time – were in relation to olive pollen and just one reaction to the olive fruit, we still needed a better understanding of how this illness works and develops (2).

Fresh olives are disgusting. According to the American Chemical Society, fresh olives contain high amounts of the compound oleuropein, which make them incredibly bitter and inedible. Soaking them in salty brine is one way to remove this compound from these fruits changing their colour and flavour profile and making them last longer (29).

However, this process makes these fruits quite salty as seen in the olives nutrition facts above. While some amounts of sodium are necessary for the body and are used to help regulate blood pressure and blood volume as well as keep the muscles and nerves working properly, too high levels are dangerous.

Having too much sodium in your bloodstream increases the risk of issues such as an enlarged heart muscle, headaches, heart failure, high blood pressure, kidney disease, kidney stones, osteoporosis, stomach cancer, and stroke (24).

This is a chemical compound used in the making of  polyacrylamide and acrylamide copolymers – substances that are used in industrial processes such as making paper, dyes, and plastics as well as treading drinking and sewage water.

This chemical can be produced in certain vegetables that contain the amino acid asparagine. According to a study in the Journal of Food Engineering, California-style canned black olives have very high levels of acrylamide, but that it can be reduced by alterations in the processing method (7).

This chemical is treated as a probable carcinogen as several animal studies have shown that it increased the risk of several types of cancer. In humans, however, toxicology studies have been inconsistent.

Even with that, the National Cancer Institute warns against the exposure and consumption of this chemical (1).

These stone fruits are said to sometimes contain traces of heavy metals like boron, sulfur, tin, and lithium – probably due to environmental pollution which transfers these metals and minerals from the soil to the plants (5).

Accordioning to two studies – one in the Interdisciplinary Toxicology journal and another in the Frontiers in Pharmacology, heavy metals in the body can lead to gastrointestinal and kidney dysfunction, nervous system disorders, skin lesions, vascular damage, immune system dysfunction, birth defects, and cancer  (28, 27).

Thankfully studies have found that in most cases, the levels of these heavy metals in olives is usually below the legal limit which makes them safe to consume. With that being said, if you eat a lot of olives, this should be something to always be aware of (9, 5).

This isn’t a side effect per se but rather a warning to anyone with small children. The pits in olives could be a choking hazard and thus you are advised to keep them away from kids. To fully prevent this, you are advised to not buy whole olives but instead choose the pitted or sliced ones. 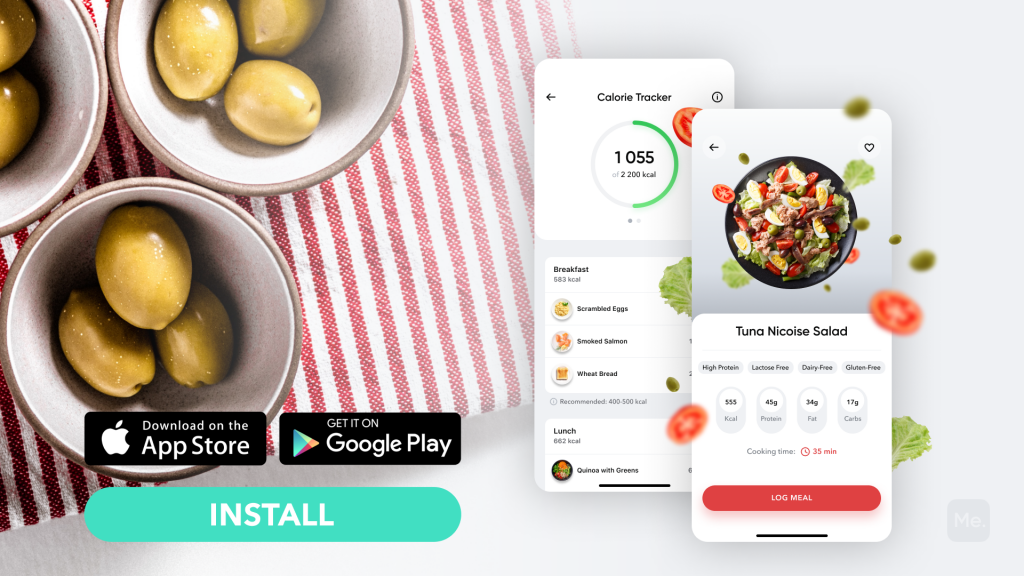 What Are The Side Effects Of Eating Kalamata Olives?

First, are Kalamata olives black olives? No, they are not. While Kalamata olives are often classified as black table olives, they are actually not black. Kalamata olives are, in fact, dark-purple in colour and are originally from the Messenia region in Greece. They are also bigger, fleshier, softer, with a milder flavour and more expensive than the green and black variety.

With that being said, the side effects of Kalamata olives are just the same as other varieties. They too have a high sodium content due to the brining preservation process and they could trigger allergic reactions in some people.

When compared to green olives, the black variety has more carbs than the green ones at 8.15 g to 5.18 g per cup of each, respectively. That being said, both varieties are still very low in carbs which make them the perfect snack for a low carb diet.

Potential side effects aside, there is no denying the health benefits of olives. These small stone fruits are packed full of antioxidants which fight against the major chronic illnesses plaguing us today. They are also very low in calories which make them fantastic options for a weight loss snack. If you are still worried about the potential side effects, we urge you to speak to a doctor to eliminate the possibility of an allergic reaction. You should also find low-sodium packaged olives and eat them in moderation to ensure that you aren’t ingesting too much salt as you consume them.

Healthy Thanksgiving Tips: What To Eat & What To Avoid

Workout Before Or After Breakfast: The Effect Of Trading Your Morning Oatmeal For A Sweaty Session And Vice Versa

Benefits Of Ginger Shots, Recipes, And Everything Else You Should Know