Blog Nutrition Zero Calorie Sweetener: Is It A Good Substitute For Refined Sugar?

Zero Calorie Sweetener: Is It A Good Substitute For Refined Sugar? 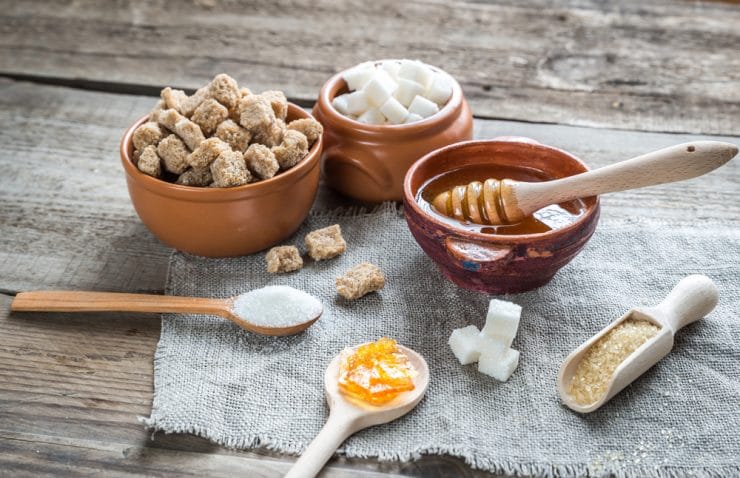 We all love sweet foods. However, they can reduce your satiety, which can ultimately lead you to overeat. This is probably why most dietitians advise you to reduce your sugar consumption. But just how easy is it to do this?

See, this is where sweeteners come in. They offer a better taste with little to no calories. Zero-calorie sweeteners can help you reduce the amount of sugar you consume in your diet. However, how safe is it for your health? Keep reading to find out.

What Is Zero Calorie Sweetener?

Zero calorie sweeteners are sugar substitutes that provide the same if not sweeter taste compared to sugar. The bonus? They come with no calories. This eventually helps you in your weight management plans.

They are generally made from sugar alcohols or obtained from plants and herbs. Interestingly, they were initially used by diabetes patients to help keep their blood sugar levels in check. However, over the years, they have become pretty popular among the general public.

How Good Is Zero Calorie Sweetener For Diet?

So, just how good are these zero calorie sweeteners? Next, we look at some of the best sugar substitutes for your diet.

Stevia is one of the best natural zero calorie sweeteners that have been approved by health authorities worldwide. It is technically obtained from the leaves of the stevia rebaudiana plant. Sweet tasting compounds known as glycosides are extracted and used to manufacture them.

The compounds are extracted, after which they are dehydrated and purified. The resultant plant-based sweetener is known as stevia. The product can be found in multiple varieties, like the liquid and dry versions.

They can be found in the market under different trade names, including:

Manufacturers are also gradually using stevia as a sweetener in new products. Some of them include:

Growing the stevia plant needs a relatively small amount of water. This, therefore, makes it a more sustainable alternative. Stevia is also a naturally sourced product that has been around for quite some time. It’s, therefore, something that you can even grow in your kitchen garden since it doesn’t require much expertise.

One of the things that make stevia really convenient is that it has few predators. This then translates to a reduced need for pesticides to protect it. Stevia is many times sweeter than a similar amount of sugar. It can therefore be used in small quantities when baking or cooking.

Many people don’t like how stevia tastes. However, you can try different brands to find the taste that you want. Stevia also tends to be more expensive than other sweeteners.

For people with diabetes, stevia is generally safe, but they should steer clear of brands that have dextrose. For some consumers, stevia products that contain sugar alcohols may lead to digestive problems, including diarrhea.

This fruit is a small round fruit that resembles a gourd and is grown mostly in Southeast Asia. Monk fruit sweeteners are extracted from the fruit, and it is about 150 times sweeter than sugar.

It has zero calories, no carbs, and no fat. It’s also safe to use for children, breastfeeding women, and expectant mothers.

Monk fruit sweetener is available in multiple forms, including liquid, powder, and granular. Additionally, it derives its sweetness from compounds known as antioxidant mogrosides, making it a naturally low-glycemic sweetener.

Although it is unclear how,  research on animals indicates that monk fruit extract may inhibit the growth of cancer cells (16). Also, multiple studies suggest that monk fruit has been traditionally used to treat sore throats, perhaps due to anti-inflammatory properties (1).

Growing monk fruit is difficult, and hence it has to be imported at a high cost. It also has a fruity taste that some people dislike and a disagreeable aftertaste.

This is a white crystalline powder made in the lab by oxidizing phthalic anhydride or o-toluene sulfonamide. Its market name is Sweet’N Low.

It doesn’t have any carbs and has zero calories. It’s about 300- 400 times sweeter than sugar, so only a small amount is enough to get a sweet taste. Most food manufacturers use saccharin because it’s stable and is safe to use even after staying for years in storage.

Read More: Natural Sweeteners For Those Who Are Stuck In A Vicious Sugar-Binging Cycle

In the market, it’s sold as NutraSweet or Equal. Aspartame is manufactured using aspartic acid and phenylalanine, which are both amino acids occurring naturally. Aspartic acid can be produced by your body. Phenylalanine, however, is an essential amino acid. That means it can only be found in food.

Aspartame has been approved by major regulatory agencies like the U.S. Food and Drug Administration(FDA), World Health Organization(WHO), and the American Dietetic Association(ADA).

It is very toxic to people with phenylketonuria because their bodies cannot properly process phenylalanine (15). People using schizophrenia medications should also avoid it (12). It’s not recommended for use in baking.

Additionally, aspartame is one of the most studied artificial sweeteners available on the market. Many of these studies seem to link it with metabolic conditions and weight gain. Also, when aspartame is broken down by your body, methanol is generated.

Too much methanol can be dangerous for your body. In fact, even small quantities can be bad if combined with free methanol found in many foods. The silver lining? It’s hard to hit the maximum recommended limit of methanol by consuming aspartame. Not even high consumers like children do.

Sucralose is probably one of the best tasting zero calorie sweeteners out there. It is created using sugar in a chemical process, resulting in three hydrogen-oxygen groups swapped with chlorine atoms. Its most common brand name is Splenda.

It’s about 400-700 times sweeter than table sugar, so you need very tiny amounts to get the sweet taste. Unlike most other sweeteners, sucralose doesn’t have an unpleasant aftertaste. Sucralose can be used for baking.

A study found that sucralose increases blood sugar and insulin levels in people who do not consume sweeteners regularly (18). Research also indicated that sucralose begins to break down at high temperatures and react with other cooking ingredients (17).

Additionally, another study found that heating sucralose with glycerol produces chloropropanols. Chloropropanols are thought to increase the risk of cancer (20).

See also  Resting Calories: Things About Your Metabolism That Nobody Taught You

Neotame is sold under the brandname Newtame. It’s a white crystalline powder made using the dipeptide that consists of aspartic acid and phenylalanine.

The group of 3,3-dimethylbutyldehyde prevents the release of phenylalanine, making it safe for people with phenylketonuria to consume. It also dissolves quickly in liquid and can be used for both cooking and baking.

It is difficult to use the correct amount required for sweetening because it’s very sweet.

In the market, it is sold under brand names such as Sunett and Sweet One.

It is about 200 times sweeter than table sugar. The body doesn’t digest or store acesulfame potassium like other foods but rather takes it in. It then expels it unchanged through urine.

Unlike aspartame, it remains stable even when subjected to high temperatures, and hence it is recommended for baking purposes.

It has a sour aftertaste, which is why it is mixed with other sweeteners such as aspartame and sucralose. Some studies claim acesulfame potassium may cause harm during pregnancy when consumed in excess. However, most of these studies were done using concentrations of acesulfame potassium that were much higher than typical human consumption (19).

What Is The Safest Zero Calorie Sweetener?

First off, the safety of a sweetener depends on whether it is approved by the relevant regulatory authorities. If it’s not approved, you may need to consider what side effects it will have on your health.

Here’s a list of some of the sweeteners and their side effects.

Read More: Agave Nectar Vs. Honey: Tracking Down A Healthier Way To Sweeten Up Your Cup Of Joe

Zero Calorie Sweetener Side Effects You Should Watch Out For

Some groups of people are at higher risk of experiencing the side effects of long-term use of stevia. These groups include:

Tardive dyskinesia (TD) is believed to be one of the side effects of taking some schizophrenia medications. The phenylalanine found in aspartame could result in the involuntary muscle movements that characterize TD (4).

Zero calorie sweetener gives you the same sweet taste of food without the calories. Swapping sugar with sweeteners is one of the best ways to lower your calorie intake. Since quitting sugar altogether is difficult, having a substitute is beneficial.

Check out this 20-min Full Body Workout at Home.

See also  7-Day Soup Diet: Are There Any Benefits That Extend Beyond Rapid Weight Loss?

Nderitu Munuhe is a freelance writer who specializes in health and wellness content. He has written for three years – advising people on how to eat healthy and stay on top of their fitness plan. This, he believes, is the first step in having a healthy body and mind.
Munuhe is passionate about football and is an avid Chelsea supporter. When he's not writing or watching the game, you can find him with his dog Lucky, taking time out from his desk for some much-needed R&R.

I am a U.S. educated and trained Registered Dietitian (MS, RD, CNSC) with clinical and international development experience. I have experience conducting systematic reviews and evaluating the scientific literature both as a graduate student and later to inform my own evidence-based practice as an RD. I am currently based in Lusaka, Zambia after my Peace Corps service was cut short due to the COVID-19 pandemic and looking for some meaningful work to do as I figure out next steps. This would be my first freelance project, but I am a diligent worker and quite used to independent and self-motivated work.

Are Green Peppers Good For You? 6 Reasons And Different Ways To…

Lemonade Fasting: Does It Work?

Are Grapes Good For Weight Loss? The Truth About Nature’s Sweets

Are Sweet Peppers Good For You? Nutrition And Health Benefits Of These…

How To Get Rid Of Water Retention Overnight: Beat Bloat With These…

40-Day Sugar Fast Rules: Do This To Reap Health Benefits Of A…

The 28-Day Sugar Detox: Here’s How To Improve Your Health By Cutting…

30-Day No Sugar Challenge: How To Win Against Your Sweet Tooth For…

High-Fiber Foods Chart: What To Eat To Ensure You’re Getting The Recommended…

Are Green Peppers Good For You? 6 Reasons And Different Ways To Eat This Vegetable

Lemonade Fasting: Does It Work?

Are Grapes Good For Weight Loss? The Truth About Nature’s Sweets

Are Sweet Peppers Good For You? Nutrition And Health Benefits Of These Colorful Vegetables

How To Get Rid Of Water Retention Overnight: Beat Bloat With These Tips

Fill The Form And Get Free “28 Day Keto Challenge” Book